Somewhere somebody must have some sense. Men must see that force begets force, hate begets hate, toughness begets toughness. And it is all a descending spiral, ultimately ending in destruction for all and everybody. Somebody must have sense enough and morality enough to cut off the chain of hate and the chain of evil in the universe. And you do that by love.

In honor of MLK Day 2015, today’s Case of the Mondays post features four songs that were written and performed in honor of Martin Luther King, Jr. Some of these were written to advocate for establishing MLK Day as a national holiday, and provide yet another example of how music continues to influence and create our history.

Stevie Wonder was very involved in the fight for making MLK Day as a national holiday. “Happy Birthday” was a popular song he used to garner support for his campaign. The song was released in 1981, and Reagan signed the holiday into existence in 1983.

This song was written by Public Enemy’s Chuck D as a direct reply to Arizona officials, including John McCain and Fife Symington, for rejecting the federal holiday celebrating Martin Luther King Jr.

Recorded on April 7, 1968, live three days after the death of Martin Luther King, Jr. and performed at the Westbury Music Fair. Nina Simone dedicated her performance to King’s memory.

U2 – Pride in the Name of Love

“Early morning, April 4/Shot rings out in the Memphis sky/Free at last, they took your life/They could not take your pride.” – U2

And I would be remiss if I did not send a Happy belated birthday to Aaliyah, who would have turned 36 this year. Frank Ocean posted an incredible cover of her song “At Your Best” (originally by the Isley Brother’s) on Saturday. Check it out on his tumblr. 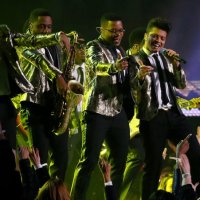